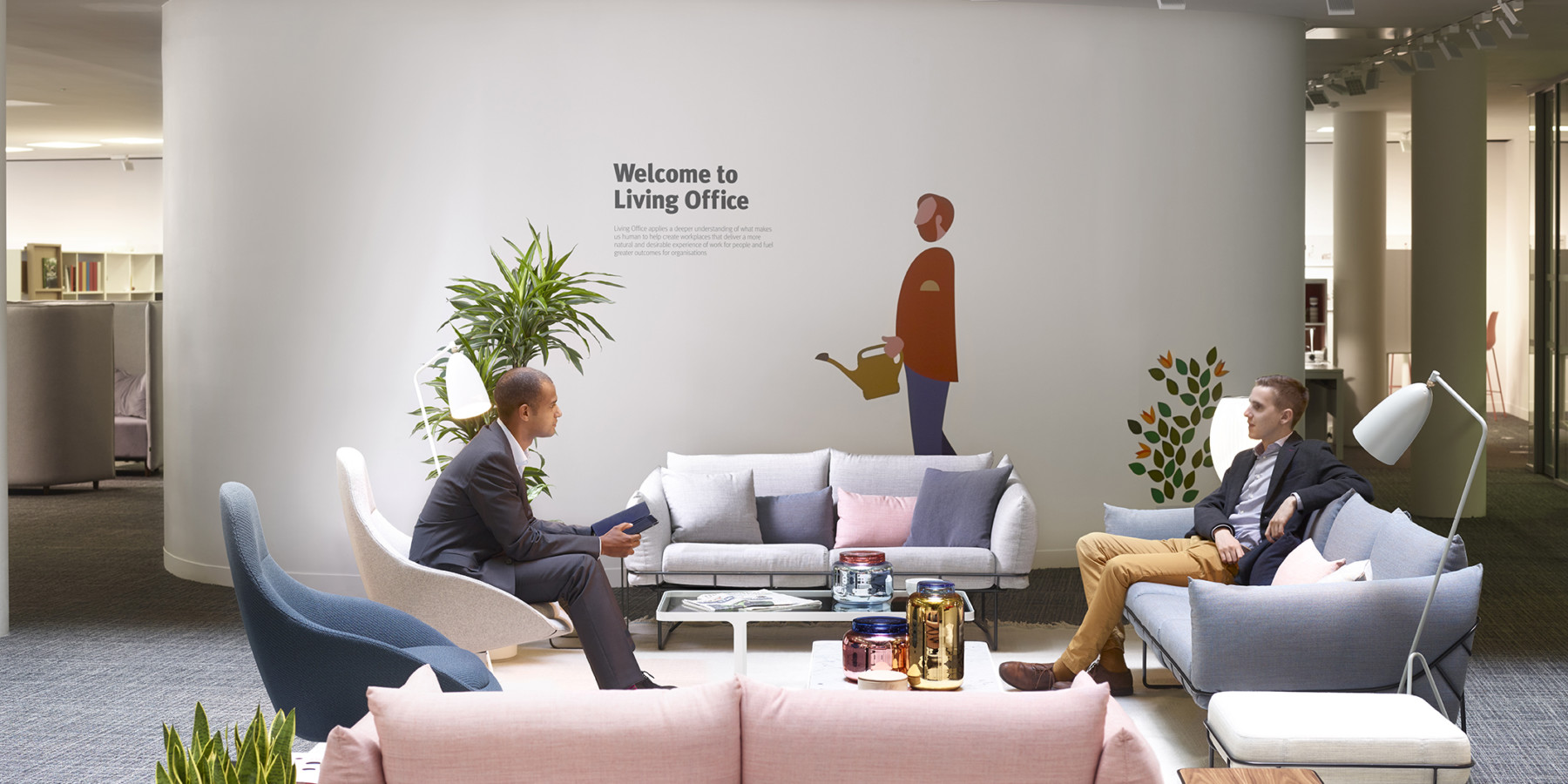 A recent tour of Herman Miller’s showroom-come-office in London left me with a host of fresh ideas on creating a workplace where everyone can thrive.

Global high-end office furniture manufacturer Herman Miller enjoys a prominent position on London’s Strand, with its glass frontage offering passers by an enticing view of what a workplace could be if we dared to dream.

Sleek desks, elegant and striking office chairs and plush sofas are carefully positioned around the vast room, where a scattering of employees go about their day-to-day business.

It’s a showroom and workspace rolled into one, where Herman Miller’s people can move from an ergonomic work of beauty of a desk chair to a raised desk for standing work, then on to a cocooned area furnished with soft divides and an inviting cushioned bench, depending on where they feel most comfortable.

In fact, first impressions on entering Herman Miller’s showroom on The Strand are that we’d walked into a hotel lobby, or even a sitting room (albeit vast). Deep-coloured, inviting sofas wrapped around coffee tables with scattered magazines in the reception area, the scene further softened with side lamps and a casual mixture of plants.

It created an instant sense of ease and a feeling of being welcomed.

Then, on the walls behind, a series of infographics, setting out Herman Miller’s vision of how a workplace should look and feel, and the fundamental human instincts which inspired it. Its starting gambit: ‘Welcome to Living Office’.

As interior landscapers, the term ‘living office’ evokes a workplace rich with all manner of planting, freshening the air and creating views of the natural world to boost morale, wellbeing and productivity.

For Herman Miller, Living Office is a more sweeping and holistic vision for the modern workplace. In their publication of the same name, they sum it up very neatly as a ‘human-centred approach to work and workplace’.

As they go on to explain: ‘Living Office applies a deeper understanding of what makes us human, to help us create workplaces that deliver a more natural and desirable experience of work for people, and fuel greater outcomes for organisations.’

Essentially, when a workplace has been designed with our unique ways of working and contributing in mind, it can be a key driver in a business’s success.

In some ways, this seems like an obvious statement, but consider how many offices are still laid out today: Uniform desks in rows or clusters, with uniform divides; standard desks for a computer and files, with standard chairs pulled up to them; a meeting or conference room off to the side or maybe down a corridor; a separate kitchen; not much else.

There may be a few attempts at personalisation at each workstation with the odd photo, a small desktop plant, a personal mug, for example, but essentially the general scene is one of homogenous workstations, encouraging only static, sitting working.

Through the Living Office approach, Herman Miller looks afresh at what a workplace can be, by analysing how we work best and recognising that we all do this in different ways. So, really, although it seems like a simple and maybe obvious idea at first, it in fact turns the traditional approach to office design on its head.

The overall aim in rethinking office design is, Herman Miller says, to create a working environment which teams the diverse needs of the individuals with the culture of their organisation.

Essentially, Living Office is about recognising that ‘organisations empower people, and people are essential to organisations’.

This win-win situation means that people who feel valued will likely contribute more to the organisation they work for.

Again, it seems obvious, but the bog-standard way of laying out an office shows little to no consideration of how a person can work according to their or the task’s specific requirements and, as such, does not broadcast a sense of investing in its employees.

The main essence of the Living Office was reached through a large-scale rethinking of office design, achieved through a lot of research, and drawing on Herman Miller’s extensive experience in the industry.

Herman Miller was a main player in the birth of American modernism: at the time it was evolving from making reproduction furniture for the home into a manufacturer of modern design and was therefore perfectly positioned to influence this new era.

Over time, the business would shift its focus to creating systems of furniture for workplaces aimed at encouraging businesses and people to work more effectively.

As the way we work is ever-changing, and our awareness of how best to be productive becomes more sophisticated, so the best in office design follows, and even leads.

It’s clear that Herman Miller sees itself at the forefront of human-centred design, and that this thinking is more relevant than ever, as we seek to incorporate workplace wellbeing, creative thinking and recognition of our diverse ways of working into the modern workplace.

What is true prosperity?

In reconsidering what true business prosperity means, Herman Miller asked a range of questions, including: ‘Should an organisational balance sheet also account for the happiness and wellbeing of individuals?’ and: ‘What are all the ways an organisation can get the greatest value from its assets?’

Herman Miller decided it needed to look afresh at how we work and how our workplaces can best meet our modern working needs and encourage greater success.

Their findings are fascinating.

One of their findings points to a need for greater variety in stations to work or meet at. It helps employees feel they are valued and also that they have a say in how they work, encouraging a greater investment in their company and confidence in driving ideas forward.

As interior landscapers, a lot of it ties into our thinking on how office plants play a part in creating a people-centric workplace, but there were also a lot of new ideas to inspire how we approach introducing greenery into offices.

Certainly, research into the many positive effects of planting in the workplace has found that the presence of office plants has helped employees feel valued: if their organisation has made the effort to create a workspace with thoughtful details such as greenery, it makes their environment more inviting and welcoming and shows that the company cares about their wellbeing.

Herman Miller’s study found that there are new ways to think about office layouts which encourage collaboration in less traditional ways. Thinking outside the conference room box (where long tables with multiple seats are often underused anyway, wasting valuable square footage) and creating spaces in places more connected to workstations and circulation spaces. Making these areas enticing is essential.

Throughout the research findings, the company’s vision and the case studies cited in Living Office, the role of the conference room comes up time and again. Finding new ways to meet and collaborate seem to be huge drivers for creating a space which works for all.

As technology now gives us the ability to work from practically anywhere, there is a danger that remote working can make us too remote.

‘Regardless of the rate of change or the power of all our new-fangled technology, all value starts and ends with people,’ Herman Miller states.

It goes on to note that technology has evolved from something we as humans must adapt to into something which is ‘modelled on more naturally human instincts’. Likewise, Herman Miller envisions ‘workplaces where the fixed formalities and formulas of the past give way to an ever-evolving, purposeful variety that is attuned to both individual and organisational needs.’

The need to interact with co-workers and other collaborators in person is still there, not necessarily in the shape of formal meetings, but as a quick get-together to bounce a couple of ideas of each other, or update on a new development on a project, for example.

In these instances, a little breakout space, semi-private but easily accessible and therefore more likely to encourage an informal meeting, can be extremely useful.

Identifying that sometimes people need a quick, impromptu meeting in a common area for just a few collaborators to chat something over and other times one or two people need a quiet place away from the office buzz to think something out can lead to a range of office design innovations. The spaces need to be located and laid out in different ways, and the furniture also would differ.

Likewise, looking at it from an interior landscaper’s perspective, office planting could play a role in creating a soft divide in a common area: it could be a small, floor-standing living wall, a bunch of medium-large pot plants clustered around the seating, or it could be planting on castors to adapt the space as needed.

In quieter spaces, the planting might form more of a screen from the rest of the office. We often place standalone displays housing air-scrubbing indoor office plants strategically around the room to keep the air and therefore the thinking fresh, or go for interesting, sculptural specimens to encourage creative thought. 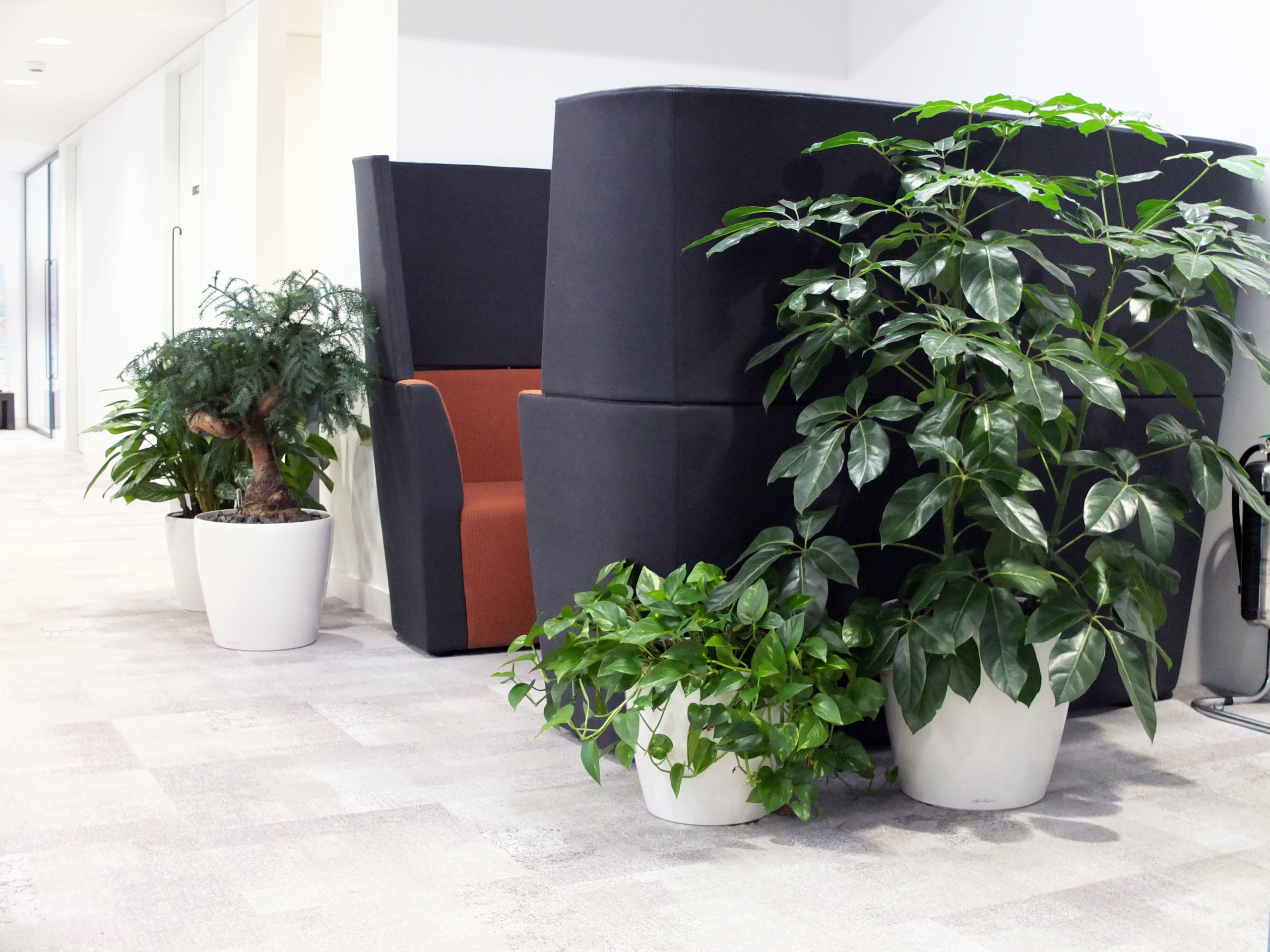 A workplace for all

Overall, it seems that Herman Miller advocates a holistic approach to office design instead of the often fractured approach of fitting out offices in a ‘linear way’, essentially different teams giving their input independently, and furniture, fittings and technology installed in separate stages. This more holistic approach brings designers, architects, facilities managers and tech teams together from the outset to decide on the way a workplace is designed in order to meet everyone’s needs.

Certainly, we have found that, when all interested parties are invested in an office layout from the get-go, including us interior landscapers with the biophilia element, the end result is a workplace which flows, engages employees, welcomes visitors and aligns with the company’s brand. From this productivity, creativity, a sense of wellbeing and, ultimately, success flows.

According to the findings in Living Office: ‘In an ultimate setting, every element in the space works together to offer people an elevated experience of work […] Aggregated at an organisational level, it’s the most effective use of resources and an acknowledgement that people and their work matter. And that, ultimately, could be the difference between winning and losing.’

For us at Urban Planters, the term ‘Living Office’ immediately gets us thinking of plants: living organisms which in turn breathe life into the workplace and workforce.

But we ought to be thinking about the term more laterally, in the spirit of Herman Miller’s more holistic approach to office design and think about all the elements which need to work together to achieve a thriving workspace for all.

We use cookies to ensure that we give you the best experience on our website. If you continue to use this site we will assume that you are happy with it.OKRead more